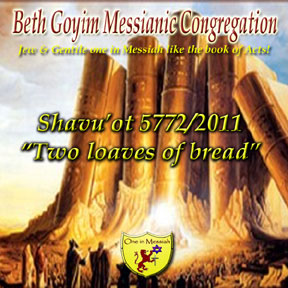 Deu 28:1 "If you listen closely to what Adonai your God says, observing and obeying all his mitzvot which I am giving you today, Adonai your God will raise you high above all the nations on earth;
Deu 28:2 and all the following blessings will be yours in abundance - if you will do what Adonai your God says:
I don’t think that there is one person I have ever met that would turn down $1,000,000. People play the lottery. People go to Las Vegas or Atlantic City hopping to strike it rich. Wanting to win some money. Adonai’s promises are much better than winning $1,000,000! There is one catch to this abundance. When we read Duet 28:1 closer we see what Adonai said to the people. If you listen closely then He will pour out so much blessing you can’t even imagine. This is where the knowledge of the Biblical Holy Day called Shavu’ot “Pentecost” is so important. To understand what Adonai did for us as a people and who was in the crowd is of paramount significance to all of us today.
Exo 12:37 The people of Isra'el traveled from Ra`amses to Sukkot, some six hundred thousand men on foot, not counting children.
Exo 12:38 A mixed crowd also went up with them, as well as livestock in large numbers, both flocks and herds.
What does it mean when verse 38 says “A Mixed crowd”? Learn how important this understanding is for the end-of-days and the promises of Shavu’ot in the “Two loaves of bread” presented at Shavu’ot.