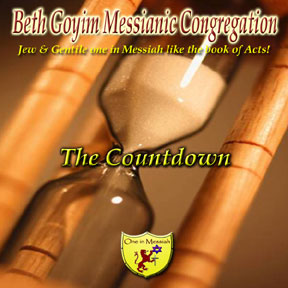 329 the countdown from Beth Goyim on Vimeo.

329 The Countdown
Deu 16:16 "Three times a year all your men are to appear in the presence of Adonai your God in the place which he will choose - at the festival of matzah, at the festival of Shavu`ot and at the festival of Sukkot. They are not to show up before Adonai empty-handed,
How many people think there is something about to happen? How many people feel on edge? How many people find that their friends, family co-workers, and pretty much everyone around them seems to be a bit edgy lately? If we stand back for a moment it almost seems that there is a countdown to something. Each year Adonai has a series of things happen. That have been going on since the time of Moshe, to King David, to Messiah Yeshua’s time.
Act 1:3 After his death he showed himself to them and gave many convincing proofs that he was alive. During a period of forty days they saw him, and he spoke with them about the Kingdom of God.
Did you know that we are living in this particular time period right now? The time that Yeshua spent with His talmidim (Disciples) after His death and Resurrection is right now. This is the time of great revelation to His people. But there is a key to the knowledge if these days, it is called the plumbline & the plum-bob do you know what they represent? Find out in “The Countdown”.