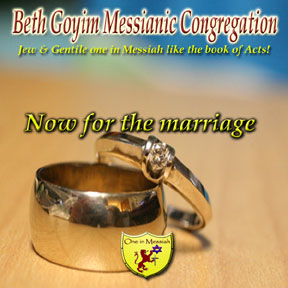 334 Now for the marriage

Exo 24:3  Moshe came and told the people everything Adonai had said, including all the rulings. The people answered with one voice: "We will obey every word Adonai has spoken."

This past week we celebrated one of my favorite days, Shavu’ot the giving of the best words every spoken. The giving of the most incredible words every written, Adonai’s teachings. The whole basis for what we should be as a people, Adonai’s words. When Adonai Himself spoke the words and gave them to His people and the mixed multitude. What an honor it would have been to be there that day. To see the fire on the mountain, to hear the King of Kings speak from on high. We as a people said; We will obey every word spoken. Many people when getting married for the first and only time they do not truly understand the concept of marriage for a few years. Generally about five years before things get properly placed in order. When the people spoke the words “I DO” or we will obey to the Lord it was much more then anyone could have imagined. Many people in modern society like to plan for the wedding. Where they will have the wedding. Where they are going to have the reception. What type of foods they are going to have. The dress the bride is going to wear. Where they are going to have the honeymoon. They put a lot of effort into those things and minimum effort into the home that they are going to live in. They plan for the wedding but do not plan for the marriage and their lives together. Our ancestors agreed to this contract of LOVE to Adonai the one we are accountable for. Learn the keys to a successful marriage to Adonai in #334 Now for the Marriage”