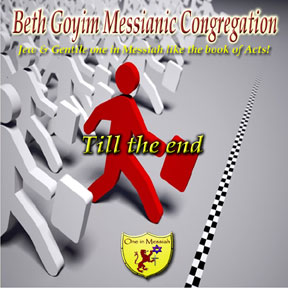 368 Till the end from Beth Goyim on Vimeo.

368 Till the end
2Ki 20:3 "I plead with you, Adonai, remember now how I have lived before you truly and wholeheartedly, and how I have done what you see as good." And he cried bitter tears.
2Ki 20:4 Before Yesha`yahu had left the city's middle courtyard, the word of Adonai came to him:
2Ki 20:5 "Go back, and tell Hizkiyahu the prince of my people, that this is what Adonai, the God of David your ancestor, says: 'I have heard your prayer and seen your tears, and I will heal you. On the third day, you are to go up to the house of Adonai.
2Ki 20:6 I will add fifteen years to your life. Also I will rescue you and this city from the power of the king of Ashur; I will defend this city for my own sake and for my servant David's sake.' "
Changing Yehovah’s heart! Is it possible? Some events in Scripture have shown that it is possible! In the account at 2 Kings 20:1, the end had come for King Hezekiah. He had become ill to the point of death and was warned by Yehovah through the prophet Yesha’yahu to put his house in order because he was going to die. Hezekiah pleaded with Yehovah through bitter tears that he had lived before Yehovah wholeheartedly and had done what was good in His eyes. Yehovah instructed the prophet to make a “fig plaster” and lay it over Hezekiah’s inflammation and, not only healed him and added another 15 years to his life, but also saved the city from attack. (The fig will be later shown to have great significance in this message). Today Adonai is saying to us to organize our affairs because there are signs that something evil is on its way. Yeshua gave his followers some warning signs at Mattityahu 24: 3-6 indicating what it will be like as the end approaches. He also advises His followers not to be frightened. The followers of Yeshua will not be frightened if they live wholeheartedly before Yehovah.
What does it mean to live wholeheartedly before Yehovah? We again look to Hezekiah’s example. The name Hezekiah means, “Yehovah is my strength.” When he was warned that he was going to die, lying on his bed, Hezekiah turned his face toward the wall. The wall represented Adonai. He knew Adonai, his King, would hear his cry if it is deeply rooted inside of him. He was able to turn to Adonai and say, “I have done as you have asked me to do.” You can only do this if you read the Word of Yehovah everyday; if you work towards a life that Yehovah says is good. Yeshua got very upset at the Torah teachers of his day who were seeking their own gratification (Mathew 21: 5-22). Yeshua is saying to us that we should love Him and follow His example. This is what living wholeheartedly before Yehovah means. We will look more closely at the Hebrew word for wholehearted in this message and its many meanings…
This message has four parts;
PART 1: THE FIG
PART 2: DON’T BE AFRAID
PART 3: INTO THE FIRE
PART 4: TILL THE END
In part 1 we will learn about the importance of Teshuvah, true repentance. The blessings that come with Teshuvah and the adding to our days of shalom.
In part 2 for those will be extremely profound about world events and may wobble your knees a little.
In part 3 it will show us what to do in the most stressful situations so that you win the prize. This most incredible prize being a seat at the King’s table in heaven.
In part 4 will guides us through what it means to be a true champion.