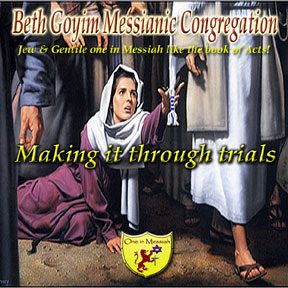 373 Making it through trials from Beth Goyim on Vimeo.

373 Making it through the trials
When we make a decision to follow Yeshua, trials come. However not all trials are bad. If Yehovah is putting you through trials, He may be trying to get your attention. He is trying to have you follow him. We begin the annual calendar with the month in which we hold the feast of Pesach. It was the time when Yehovah released the children of Israel from their trials. However to be released, the children of Israel had to do something. On day 10 of the first month of the year, they were commanded to pick a male lamb or male goat; tend to it until the 14th day, slaughter it and then put the blood on the lintel and doorposts of their homes. They obeyed Yehovah exactly as he commanded and were released from bondage.
To truly follow/obey the one true God you have to be intimate with Him. You have to know Him. Yeshua said at John 17:3 as he prayed to the Father for his Talmidim, “Eternal life is this; to know you the one true God and him whom you sent, Yeshua the Messiah” To know the one true God, Yehovah, is to want to please Him, to be true to His Word. In Proverbs 28:9 it says “If a person will not listen to Torah, even his prayer is an abomination.” In John 17:6 Yeshua continued, “I made your name known to the people you gave me out of the world. They were yours, you gave them to me and they have kept your Word (your Torah and Tanakh).” In other words Yeshua is saying get away from the Rabbinic Talmud and be true to His Word. When we make a choice to follow the Word of Yehovah, we begin to rock the boat. The world is not happy with us. If you are trying to stand for your faith in God, satan is going to try to come against you. Lies will be told about you from people. This is not only co- workers, also family members that do not know the Bible. As time gets worse, as it will, we need to get closer to Yeshua; to follow His example. Yeshua could never will get angry with you if you follow His example. The worse the events get the worse it’s going to be for the followers of the Adonai. The purpose of the trial is to test how genuine we are to Yehovah and to be judged worthy of a seat at His table in heaven.