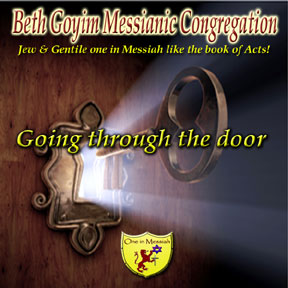 361 Going through the door from Beth Goyim on Vimeo.

Messiah Yeshua said, “I am the gate, if someone enters through me he will be safe and will go in and out and find pasture” (Yochanan 10:9). He also said, “Go through the narrow gate because wide is the gate leading to destruction and many are the ones finding it but narrow is the gate that leads to life but few are finding it” (Mattiyahu 7:13,14). When you find Messiah, many things happen at that gate - decision-making, consecration, redemption. When you walk through that narrow gate, you begin to live by faith. Stepping through that gate or door, you begin an amazing journey. You become a new creation (2 Corinthians 5: 14-21). You now have respect for Yehovah’s authority. You recognize that there are rules you must follow and that you have the promise of amazing blessings. However, spiritually what does a doorway mean? In Devarim 6: 1-9 Yehovah commands the children of Israel to write His words on the doorposts of their homes and gates. This is literally done by placing a Mezuzah on the doorway/gate of the home in which is contained the scripture in Devarim 6 or the 10 Commandments. It says to those that do not follow Yehovah that your house has the promises of Yehovah on it.
The door/gate represents the separation between Yehovah’s people and others. We have the example of this separation in B’resheet 19: 1-11 when the messengers of Yehovah shut the door between the people of Sodom and Lot. Again in B’resheet 7: 1-17 Yehovah shut the door of the Ark between Noach and his family and those who refused to be warned by the Word of Yehovah. Decision making at the doorway is seen in Genesis 18:1 when Abraham on seeing the three strangers decided to run to greet them and show them hospitality, receiving the incredible promise from Yehovah. Consecration at the door is seen when Aharon and his sons were consecrated at the doorway of the Tent of Meeting (Leviticus 8: 1-9). Rut the Gentile was redeemed at the City gate (Ruth 4:1-10). Boaz stepped through an incredible door when he accepted Rut as his wife bringing her, a Gentile, into the lineage through which Yeshua would come...take a few minutes to watch or listen to “Going through the door”

The Mezuzah a commandment of YHVH for all follwers

On the doorposts of every Observant-Jewish home, you will find a little rectangular case. Inside that case is a Mezuzah. It's there because the Torah commands us to affix a Mezuzah on each doorpost in our homes.

What is a Mezuzah? In brief, a Mezuzah is two chapters from the Torah written (in Hebrew, of course) on a piece of parchment. The parchment is then rolled into a scroll, wrapped in paper or plastic, usually inserted into a hard-plastic or metal case, and affixed to the doorpost. We will, with YHVH’s help, discuss this more at length below. First let us discuss the meaning of this Mitzvah.

Deu 6:5  and you are to love Adonai your God with all your heart, all your being and all your resources.

Moreover, Yehovah is our God, Whom we must love and obey, and Who protects us.

Every moment that the Mezuzah is on your doorpost is another merit in your favor, even though you are not actively doing anything!

How a Mezuzah is Made

There is a common tendency to call the box the "Mezuzah," and the scroll the "parchment." This is a mistake. The Mezuzah is the parchment scroll with the writing on it. The box is just a box. It's primary purpose is to protect the Mezuzah that is inside it.

A Mezuzah must contain in Hebrew, in a special alphabet, the following two chapters: Deuteronomy 6:4-9, and Deuteronomy 11:13-21. We at BGMC think the words written by YHVH Himself the Ten Commandments are also extremely appropriate.

After the Mezuzah is written, it should look something like this: 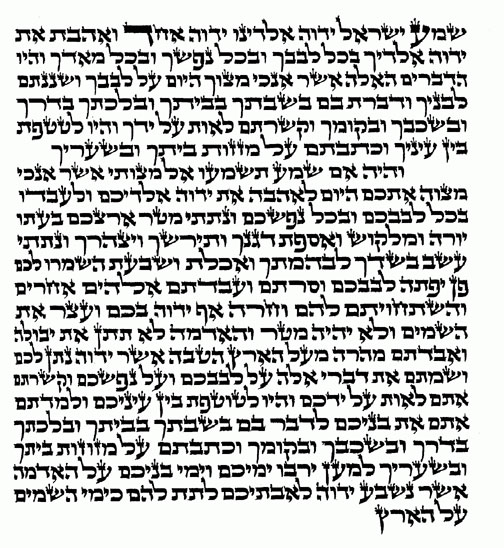 (Please note that all the Names of YHVH the gif to the left ha   ve been intentionally created incomplete, to prevent any accidental desecration. However, it is still Torah, and should not be treated lightly.)

This is not necessarily the actual size. A Mezuzah can be anywhere from two inches square to six inches square. However, it is inadvisable to use a two-inch square Mezuzah, as they are harder to write, and therefore more prone to errors and spoilage.

There is also writing on the outside of the Mezuzah, including other Names of YHVH, one of which becomes at least partly visible when the Mezuzah is rolled.

Of course, the Mezuzah will not look like this on the doorpost, because Jewish rabbinical Law says that it must be rolled and placed in a case.

The Mezuzah should be written on special, handmade parchment. The parchment must come from a kosher animal, such as a cow, or a goat, and must be prepared by means of specific processes.

Rabbinal Law that is manmade states these following things; but first remember these rabiinic laws although very nice CAN NOT be backed up with the words of TORAH:

The ink used in the writing must also be made according to specific Laws. Among other things, it must be black. The quill used for the writing is also made a certain way (but that's mostly for practical reasons, not for legal reasons). And the writing of the Mezuzah itself must be performed according to many very exacting Laws.

The person who writes the Mezuzah is called a sofer (scribe). Since Mezuzah is a Commandment of the Torah, we must put the maximum holiness into it. This can be done only when a holy person writes the Mezuzah. A sofer must be fully trained in all the many Laws of writing mezuzos, tefillin, and Torah Scrolls. He must also love and fear YHVH, and be very punctilious in performing the Commandments properly and with holiness.

In the case of Mezuzah and tefillin, there is also an added concern that demands that the sofer be concerned about performing the Commandments properly. When a Mezuzah is created, the sofer must write the words in order. If even one letter is written out of order, the entire Mezuzah is invalid. If he writes an entire Mezuzah, and then discovers that one letter was written completely incorrectly, he cannot fix it out of order. If he fixes the letter, he then has to erase and rewrite the entire Mezuzah from that point forward. The problem with this is that often this means that he would have to erase YHVH's Name, and that is forbidden.

So, if he makes a mistake with, say the third letter in the Mezuzah, and he discovers it only later, or if the third letter got ruined later somehow (like ink or water fell on it), this is a problem. He has to rewrite the letter, but that means that he has to erase and rewrite every letter -- in order -- from the third letter until the end. However, the third word of every Mezuzah is Hashem's Name, and none of the letters in Hashem's Name may be erased. (It is forbidden to erase even one letter of Hashem's Name.) This means that the entire Mezuzah is invalid, because one letter is invalid, and the Mezuzah must now be put away, according to the Laws of invalid holy items. (The Law of writing entirely in order is true for Tefillin as well, but not for Torah Scrolls.)

The Requirement of Mezuzah

It is best to place the mezuzos on the doorposts when you first move in. In any case, do not wait longer than thirty days before putting up the mezuzos.

If you will not be living in that home for longer than 29 days, you are not required to have Mezuzos.

Generally, Jewish Law defines a door as having a ceiling and two doorposts. To be a doorway, it must have a lintel. A lintel is a horizontal top-piece over the doorway, which gives the opening the look of a doorway. An opening (like a gate) that has no ceiling, but just has two vertical posts, does not need a Mezuzah. Since there are many types of doorframes, it is best to describe to the sofer who sells you your mezuzos any different type of doorways you may have; he should be able to tell you which ones need mezuzos and which do not.

Generally, Jewish Law defines A gate (that has a lintel) that reaches 30 inches or more higher than the ground must have a Mezuzah.

How to Affix a Mezuzah. ( Generally, Jewish Law not Torah but Talmud defines)

The case must be firmly affixed to the doorpost, in a manner that will not easily allow it to fall off. If this is a metal case, to be fixed to a metal doorpost, double-sided tape is strong enough to be used. However, scotch tape should NEVER be used, because it is not strong enough, and making the blessing would be very questionable. The blessing translates, more or less, as "and Who has commanded us to strongly affix a Mezuzah." So in order to make the blessing before putting up the Mezuzah, we must be sure that we are putting it up strongly. Therefore, the best thing to use is nails. Mezuzah cases usually have nail holes.

The Mezuzah scroll, in the case, should be placed on the right doorpost as you enter the house.

The Mezuzah should be placed at the bottom part of the top third of the doorpost. So, for example, if your doorway is 9 feet high (which is rather high, I know, but this is just an example), you would place the Mezuzah at the bottom of the third foot from the top. The bottom end of the Mezuzah would be touching the top of the fourth foot counting from the top.

The Mezuzah should be placed within the frame (wherever possible), but as close as possible to the outside of the doorframe. This way, one of the first things you meet when you come home is a Mitzvah.

Before placing the Mezuzah on the doorpost, hold it in place, with the hammer ready (in the case of double-sided tape, hold it an inch or so away from the doorpost), and recite:

(Blessed are You Adonai our God, Who has made us holy through His Commandments and commanded us to strongly affix a Mezuzah.)

Place the Mezuzah on the doorpost and nail it in if using nails.

Keeping the Commandments of the Torah always brings blessings, and the Talmud says that keeping the Commandment of Mezuzah brings long life and is a protection for the home. Of course, the holier a home is kept, the more the protection. Therefore we should always be careful of what we bring into our homes. When we are prepared to carry something into our home, whether it be food to eat, or food for thought (books, magazines, etc.), we should stop and consider, whether or not it will shame the Mezuzah to have that carried past it into the home. If we do that, and protect our homes from spiritual invasion, we can be assured that our homes will always be protected from physical invasion.