SYNOPSIS: Each and every person is responsible for their own salvation. Yes you heard correct. Yeshua the Jewish Messiah made a way for each and every person to choose to follow or not, the choice is totally individualized. In this Shabbat lesson we are going to study a 6 themed presentation. Starting with the words of Yeshua in Mattiyahu 24 how they a drawn from an understanding of the book of Judges. We will see how the world we live in today is a carbon copy of the 1st two chapters of Judges. We this knowledge is needed because of the arch that is being built has great, great consequences on America’s first capital and therefore the world.

THEME 1: ARRESTED FOR THE WORD. A time of worldwide hatred of Yeshua most dearest possession. The values of a culture that are horrendous. But that is not where it started.

THEME 2: BETRAYAL BECAUSE EVERYONE IS DOING WHAT IS RIGHT IN THEIR OWN HEARTS. A sad state of affairs.

THEME 3: FALSE PROPHETS. False Prophets arise to give hope or hate not in line with the full council of Yehovah’s word

THEME 4: THE DISTANCE IS SO GREAT YOU CAN EVEN SEE THE ORIGINAL. It is amazing talking to people who say they know the Lord. They are so far from the truth that seculars know more them. You are far from the truth and Yeshua the never changing Torah observant Messiah is that word. So when we don’t know what the biblical meaning of the word love is we grow cold. Because everyone will do what is right in their own eyes

THEME 5: THE RAPTURE DEBUNKED. One verse  is a checkmate for those misguided fools

THEME 6: THE ARCHWAY IN THE FIRST CAPITAL SAYS IT ALL. A study of Judges chapter 1 & 2 is the key to those really want the truth

Mat 24:9  At that time you will be arrested and handed over to be punished and put to death, and all peoples will hate you because of me. Mat 24:10  At that time many will be trapped into betraying and hating each other, Mat 24:11  many false prophets will appear and fool many people; Mat 24:12  and many people's love will grow cold because of increased distance from Torah.Mat 24:13  But whoever holds out till the end will be delivered.

Gen 8:20  Noach built an altar to Adonai. Then he took from every clean animal and every clean bird, and he offered burnt offerings on the altar. Gen 8:21  Adonai smelled the sweet aroma, and Adonai said in his heart, "I will never again curse the ground because of man, since the imaginings of a man's heart are evil from his youth; nor will I ever again destroy all living things, as I have done.

Mat 24:10  At that time many will be trapped into betraying and hating each other,

Mat 24:11  many false prophets will appear and fool many people;

theme 4 THE LOVE OF MANY HAS GROWN COLD WHY?

Deu 32:8  "When `Elyon gave each nation its heritage, when he divided the human race, he assigned the boundaries of peoples according to Isra'el's population;

Deu 32:9  but Adonai's share was his own people, Ya`akov his allotted heritage.

Mat 24:13  But whoever holds out till the end will be delivered.

THEME 6 A STUDY OF THE FIRST 12 CHAPTERS OF JUDGES

Gen 7:1  Adonai said to Noach, "Come into the ark, you and all your household; for I have seen that you alone in this generation are righteous before me.

Gen 12:1  Now Adonai said to Avram, "Get yourself out of your country, away from your kinsmen and away from your father's house, and go to the land that I will show you. Gen 12:2  I will make of you a great nation, I will bless you, and I will make your name great; and you are to be a blessing.

Gen 26:6  So Yitz'chak settled in G'rar. Gen 26:7  The men of the place asked him about his wife, and out of fear he said, "She is my sister." He thought, "If I tell them she's my wife, they might kill me in order to take Rivkah. After all, she is a beautiful woman." Gen 26:8  But one day, after he had lived there a long time, Avimelekh king of the P'lishtim happened to be looking out of a window when he spotted Yitz'chak caressing Rivkah his wife.

Gen 30:1  When Rachel saw that she was not bearing children for Ya`akov, she envied her sister and said to Ya`akov, "Give me children, or I will die!" Gen 30:2  This made Ya`akov angry at Rachel; he answered, "Am I in God's place? He's the one who is denying you children."

Gen 37:18  They spotted him in the distance, and before he had arrived where they were, they had already plotted to kill him. Gen 37:19  They said to each other, "Look, this dreamer is coming! Gen 37:20  So come now, let's kill him and throw him into one of these water cisterns here. Then we'll say some wild animal devoured him. We'll see then what becomes of his dreams!"

Gen 41:42  Pharaoh took his signet ring off his hand and put it on Yosef's hand, had him clothed in fine linen with a gold chain around his neck

Exo 1:8  Now there arose a new king over Egypt. He knew nothing about Yosef

Exo 1:9  but said to his people, "Look, the descendants of Isra'el have become a people too numerous and powerful for us.

Exo 3:4  When Adonai saw that he had gone over to see, God called to him from the middle of the bush, "Moshe! Moshe!" He answered, "Here I am." Exo 3:5  He said, "Don't come any closer! Take your sandals off your feet, because the place where you are standing is holy ground.

Exo 4:24  At a lodging-place on the way, Adonai met Moshe and would have killed him, Exo 4:25  had not Tzipporah taken a flintstone and cut off the foreskin of her son. She threw it at his feet, saying, "What a bloody bridegroom you are for me!" Exo 4:26  But then, God let Moshe be. She added, "A bloody bridegroom because of the circumcision!"

Exo 12:21  Then Moshe called for all the leaders of Isra'el and said, "Select and take lambs for your families, and slaughter the Pesach lamb. Exo 12:22  Take a bunch of hyssop leaves and dip it in the blood which is in the basin, and smear it on the two sides and top of the door-frame. Then, none of you is to go out the door of his house until morning.

Num 14:27  "How long am I to put up with this evil community who keep grumbling about me? I have heard the complaints of the people of Isra'el, which they continue to raise against me.

Deu 33:1  This is the blessing that Moshe, the man of God, spoke over the people of Isra'el before his death: Deu 33:2  "Adonai came from Sinai; from Se`ir he dawned on his people, shone forth from Mount Pa'ran; and with him were myriads of holy ones; at his right hand was a fiery law for them.

Jos 24:16  The people answered, "Far be it from us that we would abandon Adonai to serve other gods;

Jdg 1:1  After the death of Y'hoshua, the people of Isra'el asked Adonai, "Who will go up for us first to fight against the Kena`ani?" Jdg 1:2  Adonai said: "Y'hudah will go up; here, I have handed the land over to him."

Jdg 1:7  Adoni-Bezek said: "Seventy kings, with their thumbs and their big toes cut off, gathered food under my table; God has paid me back in accordance with what I did." They brought him to Yerushalayim, and he died there.

Key V: Jdg 19:14  So they went on and kept traveling, until the sun set on them near Giv`ah, which belongs to Binyamin.

Gen 19:5  They called Lot and said to him, "Where are the men who came to stay with you tonight? Bring them out to us! We want to have sex with them!"

Jdg 2:11  Then the people of Isra'el did what was evil from Adonai's perspective and served the ba`alim. Jdg 2:12  They abandoned Adonai, the God of their fathers, who had brought them out of the land of Egypt, and followed other gods, selected from the gods of the peoples around them, and worshipped them; this made Adonai angry. Jdg 2:13  They abandoned Adonai and served Ba`al and the `ashtarot.

April 2016: The Temple Of Baal Will Be Erected In Times Square In New York City 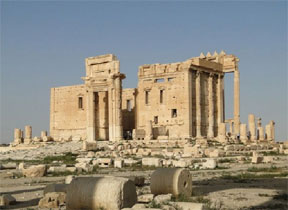 The Temple of Baal (also known as the Temple of Bel) was a world famous landmark that was located in Palmyra, Syria.  In August 2015, this temple was destroyed by ISIS, and most of the world recoiled in terror at the loss of a “cultural heritage site”.  In an attempt to “preserve history” two exact replicas of the 50 foot arch that stood at the entrance to the temple will be erected in April 2016 in Times Square in New York City and in Trafalgar Square in London.  In ancient times, child sacrifice and bisexual orgies were common practices at the altars of Baal, and now we are putting up a monument of worship to this false god in the heart of our most important city.

Jdg 2:15  Whenever they launched an attack, the power of Adonai was against them, so that things turned out badly — just as Adonai had said would happen and had sworn to them. They were in dire distress.

Jdg 2:16  But then Adonai raised up judges, who rescued them from the power of those who were plundering them. Jdg 2:17  Yet they did not pay attention to their judges, but made whores of themselves to other gods and worshipped them; they quickly turned away from the path on which their ancestors had walked, the way of obeying Adonai's mitzvot — they failed to do this.

Jdg 2:19  But after the judge died, they would relapse into worse behavior than that of their ancestors, following other gods to serve and worship them; they abandoned none of their practices or stubborn ways. Jdg 2:20  So the anger of Adonai blazed against Isra'el; he said, "Because this nation violates my covenant, which I ordered their fathers to obey; and they don't pay attention to what I say;

Jer 6:16  Here is what Adonai says: "Stand at the crossroads and look; ask about the ancient paths, 'Which one is the good way?' Take it, and you will find rest for your souls. But they said, 'We will not take it.' Jer 6:17  I appointed sentinels to direct them: 'Listen for the sound of the shofar.' But they said, 'We will not listen.' Jer 6:18  So hear, you nations; know, you assembly, what there is against them. Jer 6:19  Hear, oh earth! I am going to bring disaster on this people; it is the consequence of their own way of thinking; for they pay no attention to my words; and as for my Torah, they reject it.